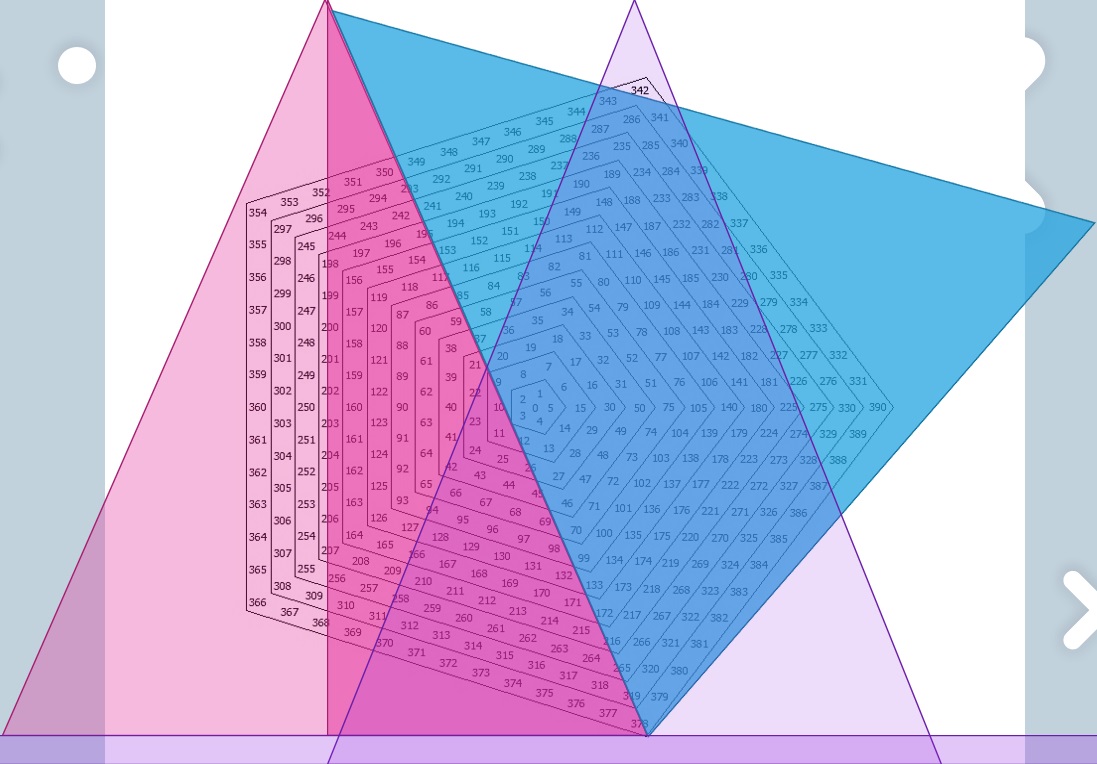 W. D. Gann is acclaimed for publishing mysterious numbered wheels and diagrams used in his projections of price and time. The wheels and constructs Gann published represented "veiled reminders" of very powerful applications of the Law of Vibration which Gann previously taught orally to his students.

Only by understanding the hidden mathematical precepts and Law of Vibration behind these wheels and "squares" can they be used successfully. Gann the wheels to be used within the context of his other tools, such as the trend-predicting Arcana, Cycles of Progression, and Top & Bottom Finder.

If you are looking for a Gann Wheel of 24 or Square of 9 to alone predict when the market will go up and down and to what price it will go, please stop wasting your time and money on Gann folklore. W. D. Gann used wheels and squares in a much different way than commercial practitioners use the ones he published. Special settings, based on the Law of Vibration, are necessary to narrow down precision targets.

The formula behind each wheel and square to accurately project price and time in each market and timeframe is broken down in detail in our "W. D. GANN: MAGIC IN THE MARKETS" Training. 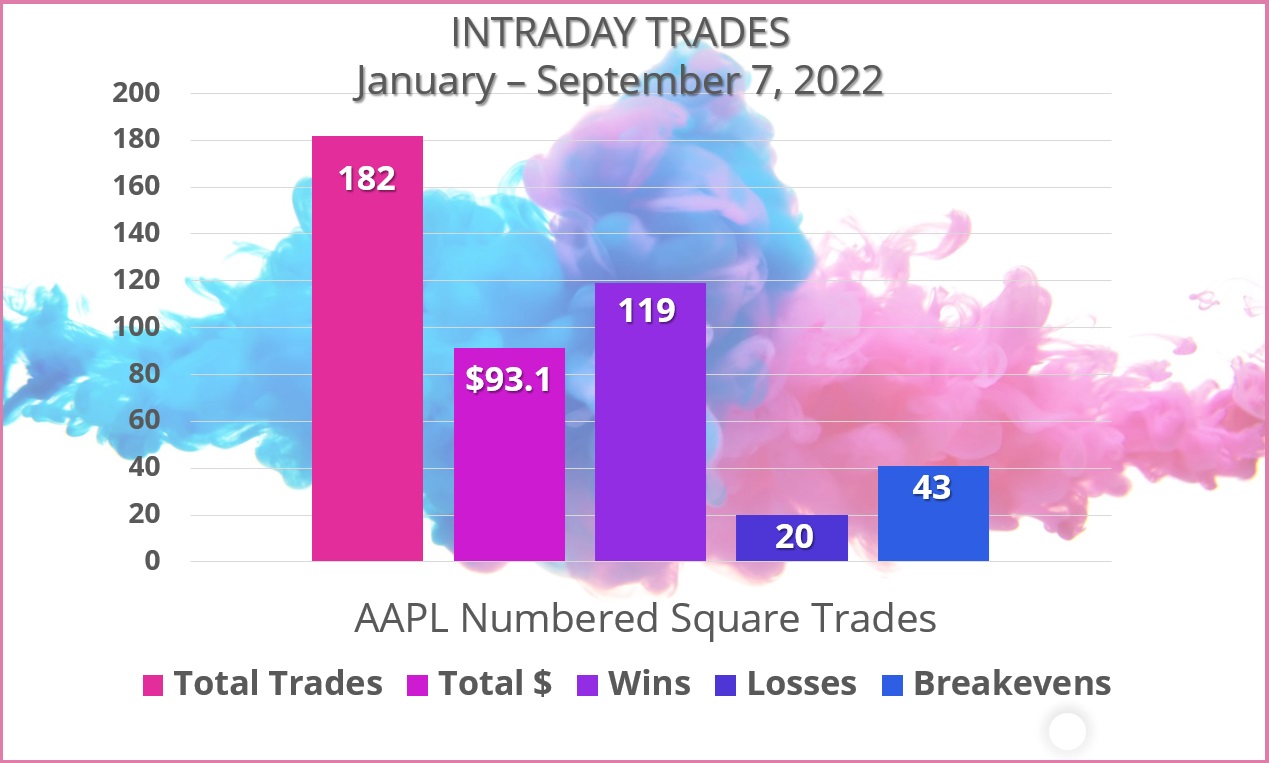 TRADING WITH THE NUMBERED SQUARES

Click the graph to the left to expand the back-testing results on AAPL stock intraday trades according to its numbered square for the first 7 months of 2022. Each stock or future vibrates to its own numbered square according to Gann's formula. AAPL has its own unique numbered square, derived by the objective calculation. The trading consists of a simple price-break each day.

Below is a more granular breakdown of the prices appearing on a chart. A couple consecutive days of a simple use of Wheel of 24 and Square of 9 on JPM stock on an intraday 2min chart. The vibration of JPM goes back to the 1700s, and is little tricky to capture. Based on the Law of Vibration, each day's vibration can vary as well. Note the integration of both the Wheel of 24 in blue lines and Square of 9's 90 degree hashes in fuchsia. Scroll through and enlarge the 2 pictures in the gallery below. 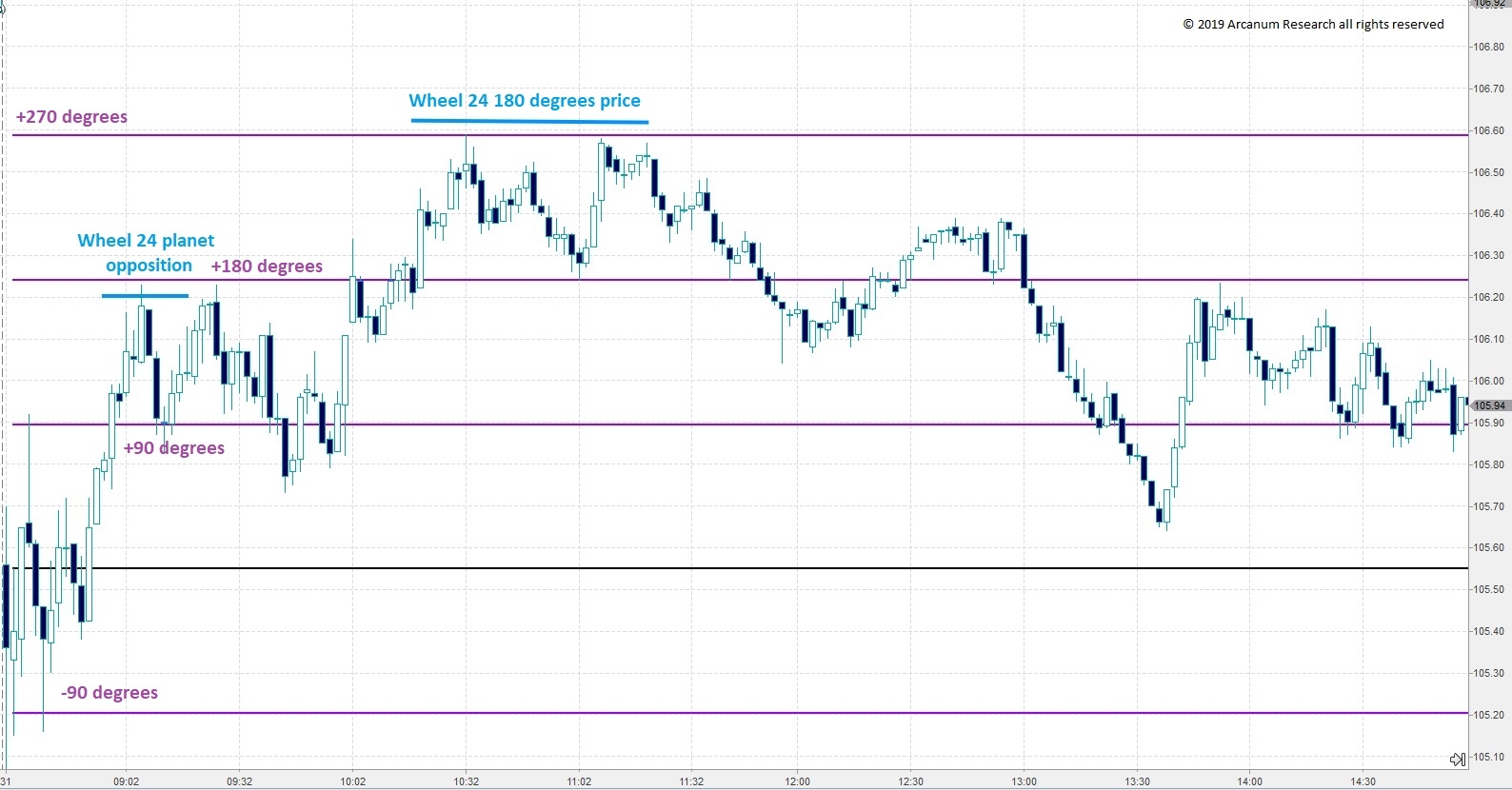 W. D. Gann used the Wheel of 24, Wheel of 12, and the Square of 9 together. He has specific functions for each numbered wheel and square. Each arrangement involved tuning to the market and timeframe using the Law of Vibration, and considering which other technique Gann paired the squares and wheels with.

On the above chart for 5-31, we see first notice that the 90 degree hashes in fuchsia are dead on for catching the resistance of price in the major moves of the day. The real vibration of JPM produces several resistance points. But the Wheel of 24 blue lines are fewer, and confirm major points of price confluence between the 2 techniques.

The lower blue line is where we would expect the first price resistance- the only real planetary opposition of the day. Now, let me underscore here that there is only 1 of these points, not 5 others. Situated very close to the 180 degree square of 9 reference, we would expect strong resistance here. Next, we find price 180 degrees opposite itself on the Wheel of 24 with the higher second blue line. Again, extremely close to the 270 degree Square of 9 point. We would also expect strong resistance here. Follow the same example, the next slide shows blue Wheel of 24 lines at the same identical resistance points on June 3rd.

The above gallery takes W. D. Gann's Wheel, Square, and Range analysis to his highest level, combining all 3 for deadly accuracy. Scroll through the gallery above and click to expand the pictures. The confluence of all 3 of these Gann price methods enable you to be sure where the buck stops.

Gann's projections integrated the numbered squares and wheels with the Law of Vibration; as Gann projected specific targets and bounces. Click here for our short target and bounce projections in advance of the market through the Black Swan Crisis.