George Bayer is even more mysterious than W. D. Gann. Bayer moved here from Germany in the early 1900s, and found his way to becoming a stockbroker and seat holder on the Chicago Board of Trade. The similarities to W. D. Gann are remarkable. Both Gann and Bayer put down roots in Brooklyn, traded financial markets, were members of the New York Stock Exchange and Chicago Board of Trade, wrote in a “veiled language.” Birth and death dates are eerily similar. While we still lack concrete evidence linking the 2, it is very reasonable to believe that another commonality is their involvement in Mystic societies.

While we enjoy surprisingly good luck decoding much of W. D. Gann’s trading methods, George Bayer is a tougher nut to crack. Bayer is less- thorough in the breadth of the material, and his style more scattered than those of W. D. Gann. 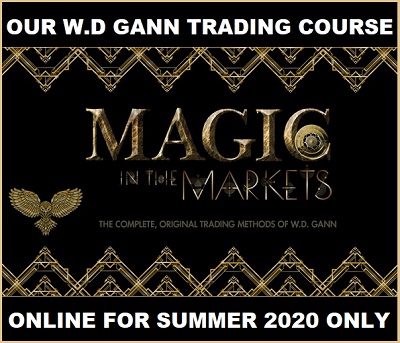 The vibe we get from George Bayer can best be described as “obscure.” Bayer’s writings relish encoded messages in the Bible, and patterns of Hebrew letters that correlate to financial market cycles. But once you know the trading methods of W. D. Gann, Bayer’s writings provide valuable supplements to the techniques that Gann encoded into his books.

For instance, Bayer is blatant about the subject matter when he correlates planetary speed, and the difference between the speeds of two planets, and declinations to turns and direction in the financial markets. This information is defined more cryptically in the writings of W.D. Gann. The writings of W.D. Gann present a much clearer and comprehensive picture of what these men were doing when properly decoded, and If you want a larger overview of the scope of the method both of these men were using, look to Bayer for answers.

Taken at face value, Bayer’s methods appear to be one-off gimmicks, disconnected from any meaningful system. Inserting them as details into W. D. Gann’s system completes the puzzle.

Take for instance the picture of the “puking bird” In Bayer’s “Egg of Columbus.” Often doubted as an urban legend, this rare book burst forth from obscurity years ago. In the book, there is a legendary cycle which Bayer describes and illustrates as what we call a “puking bird.” The key to decoding the whole book is done through one of its foot-notes. When this vital information is combined with the “battle dialogue in Gann’s “The Tunnel Thru The Air.”

Does all this cryptic jargon make you curious? Gann & Bayer’s writings describe something they would use every day to trade financial markets. Let’s transition to the real, specific trading formulas. See the finished product here, in our

It's very notable that, while many claim profitable trading from the methods of W. D. Gann, finding anyone who claims to have decoded George Bayer’s system into profitable system apart from Gann’s methods is a bit difficult. We believe that his information is best served as a supplement to what can be decoded from W. D. Gann’s writings. At the bottom of this page is a list of Bayer’s publications. Many can be found on PDF on the internet.

• Complete Course in Astrology: Erection and Interpretation of Horoscopes for Natives As Well As For Stocks – 1937.

• Turning Four Hundred Years of Astrology to Practical Use– 1943.

20 MAY  2020
This exclusive webinar begins by reviewing our Law of Vibration Price Projections made in advance of market legs down during the COVID-19 Black Swan. We will then see how Gann's forecasting and cycles did during the volatility....
Register

17 & 31 JUL 2020
Taken by traders and analysists from some of the largest financial houses across the globe, “Magic In The Markets” covers the entire catalogue of W. D. Gann’s original technical analysis and trading methods. To honor previous commitments given in light of the COVID-19 lockdown, we are offering an online option only for summer 2020...
Register

Futures, Equities, and Options trading has large potential rewards, but also large potential risk and is not suitable for everyone. You must be aware of the risks and be willing to accept them in order to invest in the futures and options markets. Don’t trade with money you can’t afford to lose. This is neither a solicitation nor an offer to Buy/Sell futures, stocks or options on the same. No representation is being made that any account will or is likely to achieve profits or losses similar to anything shown on this website. The past performance of any trading or technical analysis technique, system or methodology is not necessarily indicative of future results. No one associated with this seminar or Chicagodaytrading.com are Registered Investment Advisors, Commodity Trading Advisors, or certified, registered, affiliated or approved in in any way with either the National Futures Association, Securities and Exchange Commission, Commodities Futures Trading Commission, or any other organization.

The “Magic In The Markets” course exegetes and replicates, as best as possible, the original technical analysis and trading and techniques of the late trader W.D. Gann; and not necessarily the exact trading methods of the presenter of the course. You may not be able to duplicate the trading results of W.D. Gann for many reasons, including, but not limited to, skill of the individual trader and the changes in financial markets since Gann traded. Recipients of this course receive hypothetical, back–tested data and not actual trading results. Course includes far more applications to market instruments and time frames than the presenter can possibly trade. Course author & presenter has sources of income in addition to his work with financial markets. “Magic in the Markets” contains both Gann’s combinations of technical analysis and trading techniques as well as those that standalone.

;HYPOTHETICAL OR SIMULATED PERFORMANCE RESULTS HAVE CERTAIN LIMITATIONS. UNLIKE AN ACTUAL PERFORMANCE RECORD, SIMULATED RESULTS DO NOT REPRESENT ACTUAL TRADING. ALSO, SINCE THE TRADES HAVE NOT BEEN EXECUTED, THE RESULTS MAY HAVE UNDER-OR-OVER COMPENSATED FOR THE IMPACT, IF ANY, OF CERTAIN MARKET FACTORS, SUCH AS LACK OF LIQUIDITY. SIMULATED TRADING PROGRAMS IN GENERAL ARE ALSO SUBJECT TO THE FACT THAT THEY ARE DESIGNED WITH THE BENEFIT OF HINDSIGHT. NO REPRESENTATION IS BEING MADE THAT ANY ACCOUNT WILL OR IS LIKELY TO ACHIEVE PROFIT OR LOSSES SIMILAR TO THOSE SHOWN.