THE TUNNEL THRU THE AIR

”The Tunnel Thru The Air” was a fiction novel written by W. D. Gann, completed in 1927. Perhaps no other book by Gann has generated the lore, following, and search for cycles that ‘Tunnel’ has.

As we have spent nearly 20 years performing literary exegesis on Gann’s written works, we think the best place to start analyzing ‘Tunnel’ is within the context of Gann’s previous work and the works of other Theosophical writers of that time. 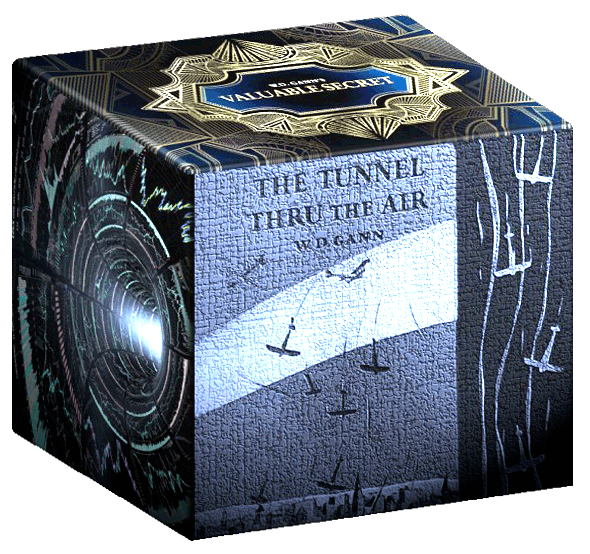 Gann’s previous work, “The Truth of The Stock Tape,” (1923) was written as factual market advice. But Gann has a dual-purpose for writing that book: to include written reminders and summary of his trend method to the private students he taught verbally. From research we have done, we believe W. D. Gann only taught his original, true methods verbally to private students. Gann’s library was written as veiled reminders to the students of his verbal teaching. These books were never meant to be decoded from scratch without the original teachings.

But ‘Tunnel’ differs because it was written as a fiction novel and not market advice. So now we have to look at who was in Gann’s group of theosophical writers (and Freemasons). One name stands out, whose work is included in Gann’s later-published book list. We find Robert Collier’s “Secret of The Ages” was a new concept in 1926. Collier cloaked an old Masonic practice into a his book on “positive thinking.” In the same way, Gann wrote ‘Tunnel’ to carry to the world this same ‘practice,’ as well as his trading methods built on the same premises, cloaked in a romance novel. 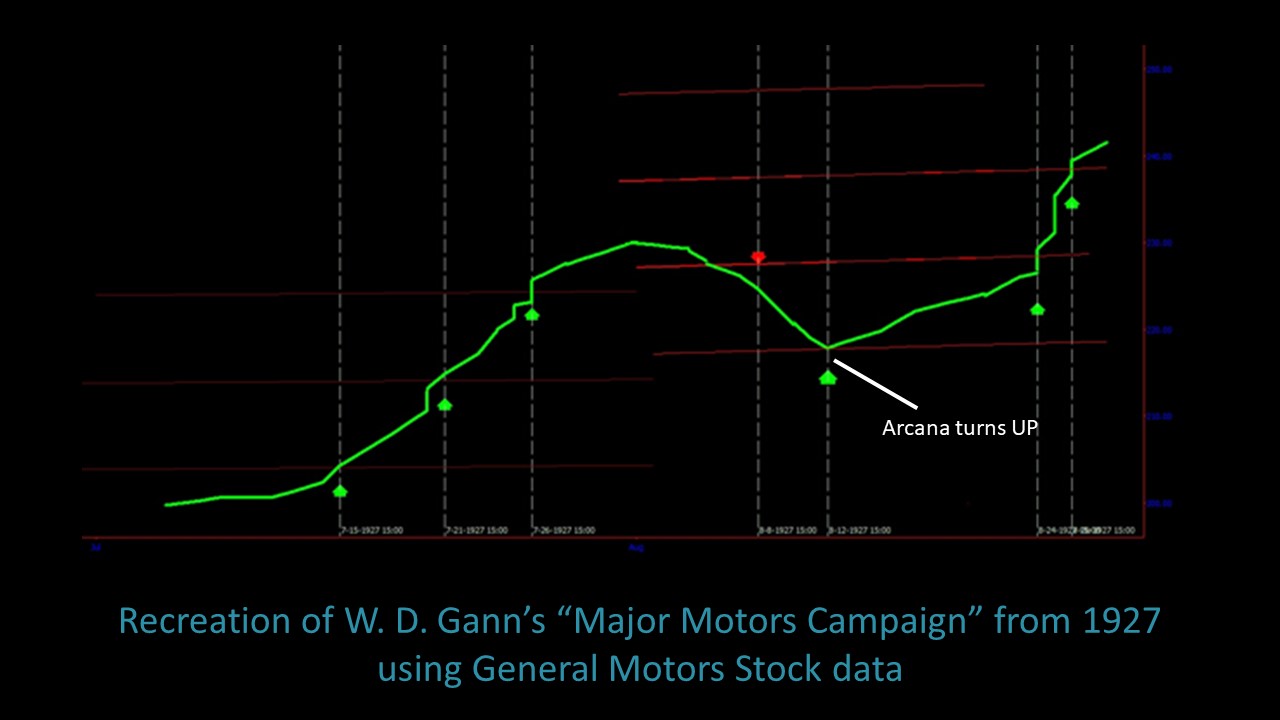 This picture shows the only known accurate recreation of W. D. Gann’s “Major Motors Campaign” as he wrote about in ‘The Tunnel Thru The Air.’ Gann used the story of this campaign to illustrate one of his favorite trading methods, what we call polarity lines. These lines represent the true breakout and breakdown prices that operate behind the scenes of the market.
Of course, Gann used the term “Major Motors” to refer to one of the leading stocks of the day, General Motors. In our “W. D. Gann: Magic In The Markets” we have a whole section decoding ‘Tunnel’ to explain how Gann sets up this technique. You can also see examples of how we apply polarity lines to modern markets on all times frames.

In “The Tunnel Thru The Air,” Gann uses the fringe adventures of the young hero Robert Gordon to walk you through the theory, rules, and applications of his most of his trading system. The story goes like this: Gordon finds a blueprint in the Bible for a unique flying machine. Through the course of its development, he meets and then loses Marie, the love of his life. Gordon’s flying machine ends up saving America in an upcoming world war that Gann predicts will take place.

W. D. Gann used this book to add clarity and definition to the trend prediction method in his previous work, “The Truth of The Stock Tape.” But then he adds new material and introduces several new techniques, such as polarity lines in the ‘Major Motors Campaign,’ forecasting in the chapter on Gordon’s advancement, trading cycles in the war narrative, and the numbered wheel use in Gordon’s preparation to circle the world. The book ends by Gann tying together most of the methods in the book into one or two veiled chapters.

All of Gann’s following books and courses reverted to books on Market advice. Toward the end of his life, Gann published a little pamphlet outlining his career on a timeline. All of his books are mentioned and reviewed. “The Truth of The Stock Tape” and “How To Make Profits in Commodities” are described by him as the best books ever written on the stock market and commodities respectively. Yet he excludes even the mention of ‘Tunnel’ from the pamphlet.

‘Tunnel’ is hard to decode because Gann wrote the book for a different reason that he wrote his other works. Gann wrote as a contemporary of Collier with the mission of bringing the knowledge of the personal Arcana to those enamored with Theosophy. Much like Carnegie or anyone who has used the Arcana for personal success, Gann wrote ‘Tunnel’ with the shared Masonic goal of putting sacred knowledge within eyeshot of the public (though in highly coded manner) and bringing an early version of the New Age message to America.

In ‘Tunnel’ Gann bounces around between a personal practice for the Arcana and its trading application that the Masons first showed him. To further complicate things, he skips around between techniques, markets, and timeframes. For these reasons, the book is very hard to decipher. But reading all of Gann’s other works will shed light on each subject matter. Gann had another habit of including theory for a technique in one writing, an illustration for the same technique in another book, and final rules in yet another work.

Peters Amundsen, an expert on Baconian cipher and “Tree of Life” patterns, claims there are additional secret messages for America coded differently than the trading methods. In fact, ‘Tunnel’ is a bit spooky in light of ‘future history.’ Penned before in 1927, Gann’s story includes Japan sneak attacking America, a world war, New York City having a skyscraper 110 stories tall involved in war (World Trade Towers weren’t built until the 60s ringing in at exactly 110 stories), and a person named Charles Manson described on a future date (from the time Gann wrote) in the book that was only a couple years before Manson was born. Was this W. D. Gann’s way of telling us he was able to extend the methods he used to forecast the way beyond the markets?

From our perspective and Gann’s lack of review of ‘Tunnel,’ we believe that Gann probably regretted trying to jam his trading system, the personal use of the Arcana, and deeper messages about the country and world into ‘Tunnel.’ For this same reason many have tried to trade with information from the book and have come up short of anything consistent or rule based. Focusing on ‘Tunnel’ exclusively while neglecting the fact that one needs to read Gann’s other works as well to get a complete description of his methods won’t yield much.

See the ourTunnel page for illustrations of the ‘Major Motors’ technique from ‘Tunnel’ taught in our “W. D. Gann: Magic In The Markets” Course.